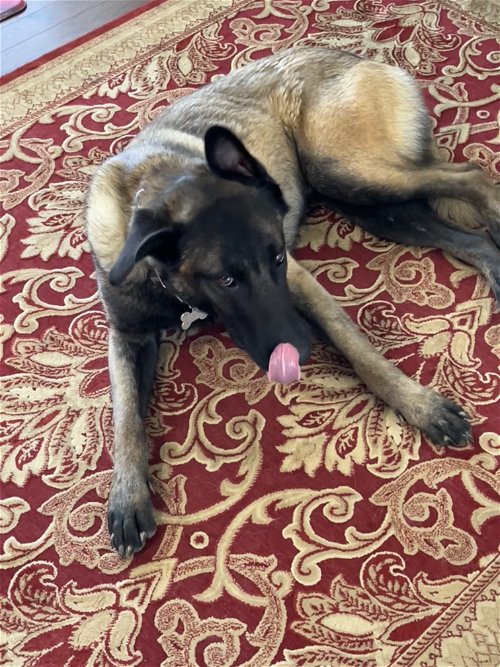 I would love you more than you can imagine.
Please adopt me!

Print an adoption flyer for Tāne!

Tāne is a young STUNNING boy around 16-18 months, very beautiful inside and out. ABSOLUTELY LOVES PEOPLE, he’s quite the showboat when taken out, he leaves a trail of broken hearts. Yes he has floppy ears but he does pop them up when playing and being goofy.

His favorite thing to do is to get as much of himself as he can onto your lap and take an afternoon nap, and then there are the kisses….. his next favorite thing.
Hes also a bit of a clown, loves to play, very much still the puppy, full of energy especially when he wants to play with his ball….. he has no problem bringing it to you over and over again. He also enjoys entertaining himself with whatever toy he can find in the toy box, it’s usually the one at the very bottom that’s the best.

He is with our four dogs, two male two female and he gets along with them just fine playing chase and the usual Mal crazy antics. He sleeps all night in his crate with no issues and he will take a nap in there after playtime.

This beautiful boy would do best in a family where he can have a running/hiking outdoors human, I believe he would make a great sport dog whether it be dock diving, agility, somewhere  he can run and jump because this boy is fast and those back legs are like springs.

He’s ok being the only dog so long as he’s with his person or he would also be fine with a playmate of his own size….he’s a rough and tumble kind of guy so a little dog would have to be watched until Tāne understands to be gentle.

He is also NOT best left in a crate for more than a couple of hours, max. He needs someone who works from home, can take him to work with them or is retired. If you are that person please fill out an adoption application. He’s waiting for you.

Tāne is located in NC.

Good with Dogs, Good with Older/Considerate Kids Only, Good with Adults, Somewhat vocal, Does Good in the Car, Requires a yard, Cratetrained, Plays fetch, Likes to play with toys, Likes to be in your lap, Playful, Affectionate, Intelligent, Even-tempered, Gentle, Goofy

ABMR thanks you for taking the time to look at our malinois available for adoption.

Other Pictures of Tāne (click to see larger version):