On March 25, 2022, a female Malinois and her six puppies were found abandoned, and taken to the La Porte, IN animal shelter.  Malinois Rescue stepped in and found fosters for all six puppies, and a foster for the momma dog.  All the puppies adjusted well to their wonderful foster homes (all had family dogs who helped the pups adjust).  The female adult went to a foster home and had some problems adjusting.  She had lost her home, lost her puppies, and then landed in a wonderful foster home; with patience and love, training and medical care, she soon thrived and was adopted by the foster family.

All pups made it to wonderful adoptive homes, and this is the story of two of the puppies, Xena and Hawkeye.

The foster mom was working one of her dogs in SARs (Search and Rescue) and decided to imprint Xena on air scenting  to see how she would do .  The first training, Xena used her sight to find the person, but the second time, she used her nose.  She soon excelled at air scenting, and at 8 months of age, earned her Level 1 in SARs, will soon be tested at the Level 2, and is already working on Level 3 problems,  and once she passes Level 3, she’ll be considered “deployable”, all before her first  birthday!!! She is high drive, loves her work, and recently imprinted on Human Remains Detection (HRD)!   Her human mom says when the working collar with the bells on it comes out, Xena can hardly wait to get started.

Hawkeye was raised in a house with three other Malinois, plus Cardigan Corgis. He was a tiny little boy, and soon learned from the others how to play tug, become potty and crate trained.  The foster home was pet sitting for the local Vet’s Malinois, and a photo was taken of the adult playing with the little puppy, both tug and chase.  After seeing the photo and video, the Vet and her husband asked if they could visit the puppy, and soon became the new adoptive home.  Hawkeye frequently visits the Vet’s practice so has learned to interact with other dogs, and loves people.  Hawkeye has been introduced to sheep  herding  this past summer and he looks to have good herding instinct.  He’ll be continuing his training, and his future looks very bright!

ABMR did a fantastic job  in working with the shelter to gain ownership of them,  in coordinating foster homes for all six puppies plus Momma, the transport  team worked their magic and transport  came together so quickly (everyone loves to transport puppies!) , and all are heal thy and have been adopted… that is a real success story 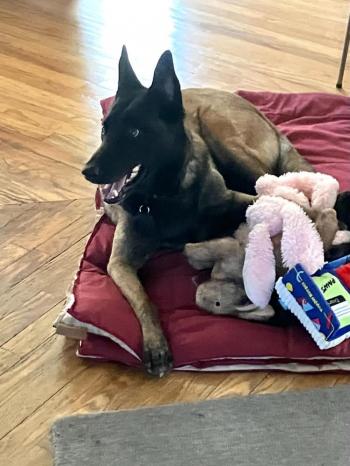 October 23rd is Luna’s happiest day! That’s the day that she met her new mom and dad. Have a wonderful life Luna, you deserve the best! New adventures ahead for Luna. The ABMR Team sends you on your way with a lot of love in our hearts. 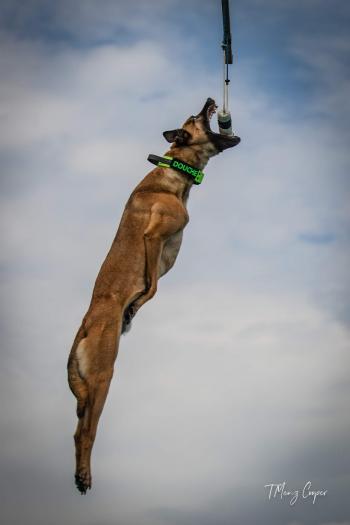 In August 2019 we received  a call from a dockdiving friend who also works at a local shelter.  There were several working dogs that had been dumped at the shelter and they reached out asking for assistance. There were three Belgian Malinois that were brothers, two of which were chosen for a local law enforcement department to become potential working k9s.  The third brother however was very timid and was starting to shut down in the shelter environment.  We decided with the help of American Belgian Malinois Rescue that we could foster the third brother, Colt.  A fourth Malinois was also taken in with ABMR and placed in Foster care.

When we went to pick up Colt from the shelter, he was terrified. We could not even get him in our car without help from the shelter.  Once home, he quickly adapted to his new home and started to slowly shine.  We started getting him acquainted with the dog sports that we participate with our pack.  Colt quickly took to everything due to his insane ball drive.  Within the first six months we had him involved in dockdiving, barnhunt and fastcat. We decided to adopt him in December 2019 since our pack openly accepted him with ease.

It is remarkable to see the transition in this scared shelter pup who only a year before was in complete shut down mode.  Now he is ranked for 2020 as the 4th Ranked Jumping Malinois in the World!  More than his athletic prowess and incredible nose, he is a total sweetheart living his absolute best life! 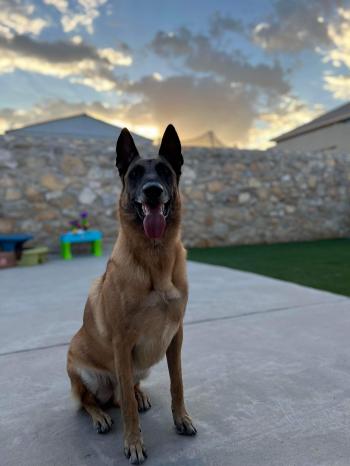 Jr was my first Mali and the first dog I got on my own as an adult. I met him through my boss Julia who had been boarding him for a year before I came along, which btw was just amazing with him. Before I knew him he was used as a breeding dog before being surrendered with his breeding partner and last litter of puppies. He possibly has multiple offspring in El Paso due to this, but luckily, those days are behind him. We had a love hate relationship at first and I wasn’t even looking for a dog, but he somehow found his way into my heart. He’s my best friend and companion and gets me through my good and bad days (even if he is a trouble maker). I really couldn’t imagine my life without him, we’re just a perfect match and I’m glad we found each other! 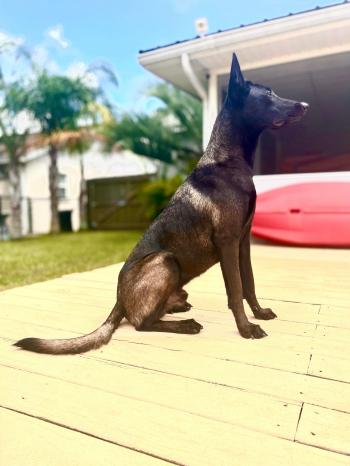 It was not easy for me to accept that it was time to start thinking about retirement for my current service dog, as having one has been one of the few things that’s helped me gain my independence back since my diagnosis. I was not expecting to find a dog as quickly as I did when I reached out to Kelli (Glock’s coordinator) in the fall of 2021. I couldn’t have asked for a dog that fits into our lives as seamlessly as Glock, now known as Joker has. It’s hard to believe that the timid, nervous dog I met when I picked him up from Animal Control would grow into such a happy, confident, &
well rounded guy. He has brought so much joy, love, laughter, & hope into our household since I brought him home in January. After months of bonding, training, & officially gaining clearance for mobility work with his excellent hips, he become a permanent member of our family in July. I’m so proud of how far we’ve come in our short time together & was over the moon with excitement when he gave his first real life medical  alert recently. A big thank you to everyone who’s been apart of our journey, I know I’m in good paws.